By Living Sustainable Life January 20, 2020
It's been more than 30 years since I last practised my Chinese calligraphy, as well as last owned a Chinese brush or ink! But Lunar New Year is just around the corner and I really want to put up a spring couplet (春联) on the door, just to get into the mood. I've even written a few sets of my own couplets - not from the usual ones that had been published for many years which everyone else is using 😁

There are or course, professional calligraphers at shopping malls to write these on the spot for any paying customers; but as usual, I'm cheap 😜😂! And I still hold on to the idea that - if I can do it myself, I shall try not to pay someone else to do it. So I thought I'd try - with or without the calligraphy tools.

I began with the sourcing of the "Four Treasures of Chinese Study" (文房四宝) around town, in all stationers and book stores I can get to by public transport (yes, I don't own a car), but to no avail. Well that's a lie - I did find the brush and the ink (ready to use ones so obviously I won't need the ink slab) but not the right paper, and it is rather late to order the paper online either. 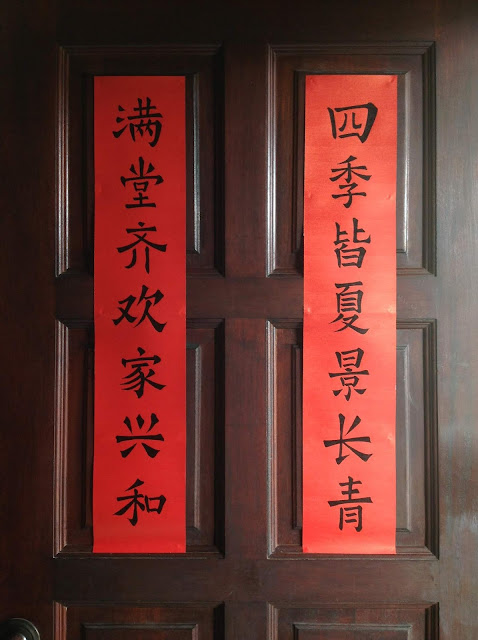 I then decided to - cheat. No, not getting someone else to do it, or even printing it from the computer; that would've been too easy!

I probably did the hardest ever way to get around it:

I bought a piece of slightly textured, shimmery red gift wrapper (finally found it at Metrojaya - thank you for such beautiful stock!), measured the length and divide it by 7 (7 characters for each side of the couplet), which is about 11cm.

Next is to draw a circle of 11cm diameter on some used (previously printed on) A4 paper, and start 'drawing' each character in my own calligraphy style. When it's done, I turned them into stencils by cutting out the characters with a craft knife: 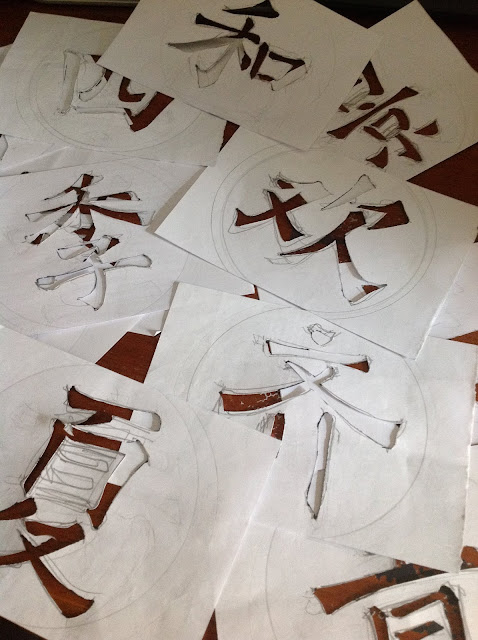 I then cut two long strips off the red gift wrapper length way (keeping the remaining, I might need it later - whenever), and arrange the stencils onto the strips, each secured by some Faber-Castell Tack-it. This allows me to trace the characters onto the red paper neatly with a fine nib permanent black art pen, then finish off with a thicker nib art pen. 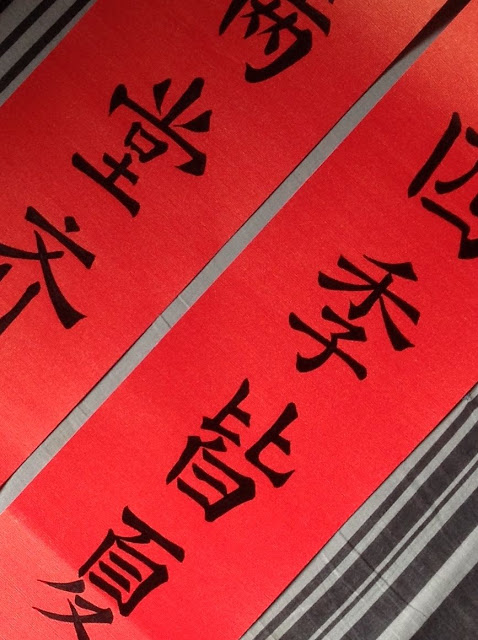 And voila, my brush-less Chinese calligraphy spring couplet is done and ready for the Lunar New Year.

Cost: RM3.90 for the gift wrapper, everything else - ready stock in the house 😁

Wishing you all a very warm and cheerful new year; as my couplet says:
"Evergreen in four seasons,
Full house of peace and joy"

Popular posts from this blog 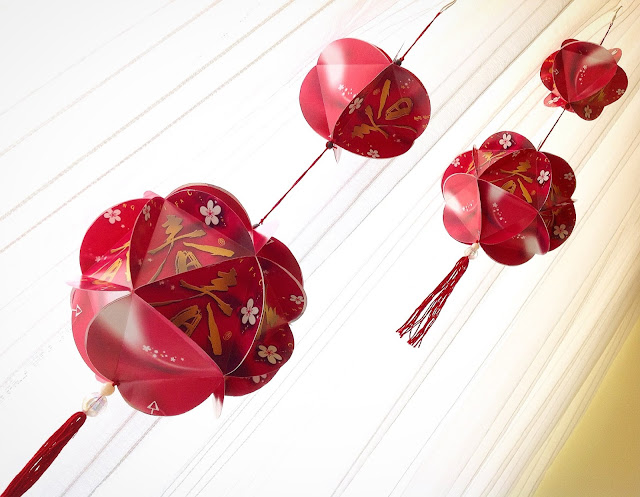 Ang Pao envelopes a.k.a. the red packets, a must have's for Lunar New Year but also a thing that will become clutter over time. We can never get the right amount of a certain design, and we'll often be left with too many unused/odd ones. Although I've handmade some this year but there is still a stack too many from previous years and some of them have specific year or zodiac design on which can't be used for the following year.

Growing up, we used to lots of fun making little lanterns with old red packets as festive decoration, and I think it's time to relive that sentiment.

Instead of the usual squarish designs, this is one in a spheric form, using just 1 basic modular shape:

Cut red packets (ang pao packets) into equal circles (about 8cm diameter) and draw an equal triangle on the reverse side. Fold on the triangle outlines, then glue the shapes together to get these:


The 2 round shapes are for the top and the bottom, whilst the long strip goes in the middle and …
Read more 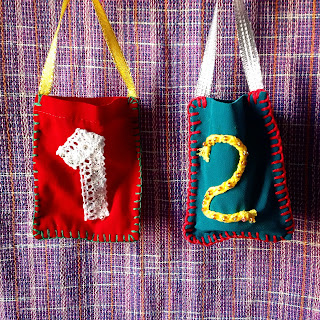 Forgive me God, for I have been lazy...
I started making my very first DIY Advent calendar in April, thinking that I have all the time in the world to finish it. But I was wrong.

As I'm using 100% reused and recycled material from everything readily existing in the house, it means that all forms and shapes are made from scratch. And my plan is to make 24 individual little bags with hand stitched numbers on!

The moment I started, I encountered a problem: my embroidery skills are nothing to shout about so stitching the numbers on with threads is out of the question. Thankfully, a solution came soon enough, which is to shape the numbers with colourful ribbons or strings then stitch them onto each bag. Phew... the plan went on...

During the first few weeks of its production, I was gung-ho and adamant about it, watching Hallmark Christmas movies while stitching away; then I got tired because it took way longer and more complicated than I expected it to be 😭 !

Then I got busy, then I …
Read more 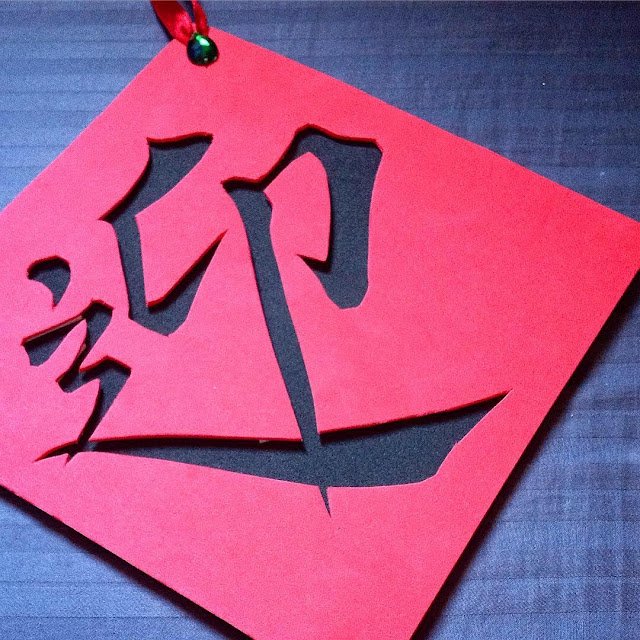 Compared to Christmas, we're not that big on Chinese New Year decoration. However, this year we've moved back to the old folks', and we shall just join in the tradition.

As usual, I'm not keen on the shop-bought decorations as they are often too horrible looking - too much gold or glitter - just make me cringe. Apart from the 2 sets of lanterns I made out last year but didn't get a chance to put them up, I decided to do my own calligraphy decoration for the front door.

I say calligraphy, but I'm really using a craft knife and a few sheets of coloured foam I had from past projects. Main reason being, I no longer own any traditional Chinese calligraphy tools such as brush and ink - but being an ex-advertising creative, I will always have my craft knife with me 😁


It wasn't a very difficult task, although I would wish for the weather to be cooler to make it easier.
Just draft each character on rough paper, cut them out to make stencils, then trace onto each r…
Read more

Living Sustainable Life
I hold on to old stuff, a lot. Whilst I try to give away and recycle as much as I can, I also try to give junk and clutter a face-lift and remodel them into something useful.